Medical Aid – Malaria in Indonesia, What Do We Do?

October 21, 2021
Malaria is a serious disease that is spread when an infected mosquito bites a human. Tiny parasites can infect mosquitoes.

Risk is present throughout the country, excluding urban areas, and excluding the areas specified: Jakarta, Surabaya, Denpasar (Bali), and other large cities are risk-free, including the beach resorts in southern Bali. Sporadic cases of malaria in travelers have been reported from rural areas of Java, Bali (Padangbai area), Bintan, and Lombok islands. The WHO data does not take into account the situation in eastern Indonesia, which is linked to the lack of existing data. Nevertheless, malaria in the regions of Flores, Sumba Timur and Kupang is important in rural villages.

*Malaria is a life-threatening disease that spreads when an infected mosquito, bites a person. The mosquito transfers parasites into that person’s bloodstream. Symptoms of malaria include fever and shaking chills. Malaria is common in tropical countries such as Africa and Asia. Malaria is treatable if it’s caught early.

Malaria is a serious disease that is spread when an infected mosquito bites a human. Tiny parasites can infect mosquitoes. When it bites, the mosquito injects malaria parasites into the person’s bloodstream.

If left untreated, malaria can cause serious health problems such as seizures, brain damage, difficulty breathing, organ failure and death. Malaria is often referred to as the epidemic of the poor while the disease is largely determined primarily by climate and ecology, and not by poverty per se, the impact of malaria wreaks havoc on the poorest, those who can least afford preventive measures and medical treatment.

The impact of malaria is not only felt in terms of human suffering and deaths caused by the disease, but also in terms of the economic impact on areas with high rates.

Malaria is a devastating disease with some 40 percent of the world’s population in 107 countries at risk today. It kills a child every 2 minutes, and some 410’000 people a year – the large majority in the poorest countries!

How common is malaria?

Malaria is common in tropical areas where it’s hot and humid. Worldwide, more than 230 million people get malaria annually, the majority of these cases occur in Africa and South Asia.

People get malaria when an infected *mosquito bites them. A *mosquito becomes infected by biting someone who has malaria. The infected mosquito transfers a parasite into a person’s bloodstream, where the parasites multiply. Five types of malaria parasites can infect humans.

“Malaria and poverty are intimately connected. As both a root cause and a consequence of poverty, malaria is most intractable for the poorest countries and communities in the world that face a vicious cycle of poverty and ill health”. – Fair Future Foundation

Although the cases have decreased since 2010, the current situation sees an upsurge in cases of malaria, linked to the economic situation of the country and the crucial lack of access to basic medical care.

In 2020, 256,000 cases of malaria were recorded in Indonesia. This figure should nevertheless be taken in the conditional because in a large number of regions of the country, people do not have an identity card or family record book, or people do not have access to medical care. Mortality, for example in the eastern regions, is still high: Fair Future can regularly notice this during medical visits to the outskirts of the region, or through testimonies from villagers. It should be noted that Alex Wettstein, founder of the Foundation and member of the medical team on site, can attest to this since he himself caught malaria on the island of Flores.

So far, there are still challenges to be overcome as the most worrying challenge is how to reduce the number of cases of active or passive malaria, such as the distribution of mosquito nets and the strengthening of human resource capacities of the medical field areas.

We also note that in some endemic areas people think that malaria is a common disease. And although malaria can be prevented and treated, it can also lead to death. Therefore, the concept of how to prevent this disease from occurring in the community is a challenge for all of us on the ground, today but especially tomorrow.

A challenge simply because medical resources are rare, health centers too far from the villages. People do not own vehicles, the roads are often difficult to navigate. The truck is most of the time the only way to get to a health center, at the cost of a difficult trip, if not impossible for a person suffering from malaria. Read about the “Truck of Life” program here. 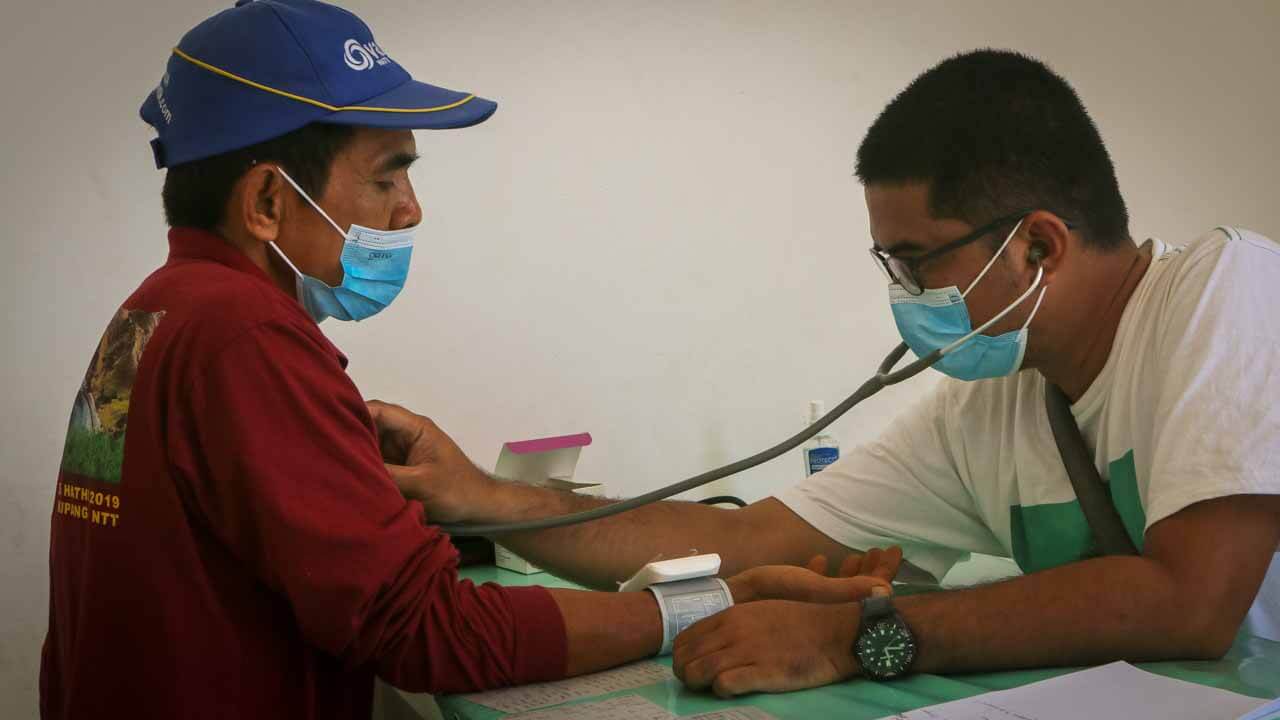 Economic cost of malaria on countries

Malaria can be an economic disaster. Countries with high malaria transmission have historically had lower economic growth than countries without malaria. Countries that succeeded in reducing malaria showed substantial growth and improved prosperity thereafter;

How is malaria treated?

Treatment for malaria should start as soon as possible. To treat malaria, your provider will prescribe drugs to kill the malaria parasite. Some parasites are resistant to malaria drugs. The type of medication and length of treatment depend on which parasite is causing your symptoms.

All malaria infections are serious illnesses and must be treated as a medical emergency. In offering guidance on the choice of antimalarial drugs, the main concern is to provide protection against **Plasmodium falciparum malaria, the most dangerous and often fatal form of the illness.

For further details, cautions, contraindications, or alternatives, including guidelines for pediatric dosages and Emergency Self Treatment, download our whitepaper

How to Protect Yourself Against Malaria.

The recommendations for malaria prophylaxis outlined here are intended as guidelines only and may differ according to where you live, your health status, age, destination, trip itinerary, type of travel, and length of stay. Seek further advice from your physician or travel health clinic for the malaria prophylactic regimen most appropriate to your needs.

If I get malaria, will I have it for the rest of my life?

No, not necessarily. Malaria can be treated. If the right drugs are used, people with malaria can be cured and all malaria parasites can be cleared from their bodies. However, the disease can continue if left untreated or if treated with the wrong medication.

Some drugs are not effective because the parasite is resistant to them. Some people with malaria can be treated with the right medicine.

Two species of parasites, ***Plasmodium vivax and ****P. ovale, have liver stages and can stay in the body for years without causing disease. If left untreated, these liver stages can reactivate and cause malaria attacks (“relapses”) after months or years without symptoms. People diagnosed with P. vivax or P. ovale are often given a second medication to help prevent these relapses. Another type of malaria, P. malariae, if left untreated, is known to stay in some people’s blood for decades.

Malaria in pregnant women can be more serious than in non-pregnant women. Malaria can increase the risk of serious pregnancy problems, including prematurity, miscarriages and stillbirths. This phenomenon is exacerbated in the regions where Fair Future works, as people live a precarious life in terms of health, access to water, lack of quality food, lack or absence of medical care and information. 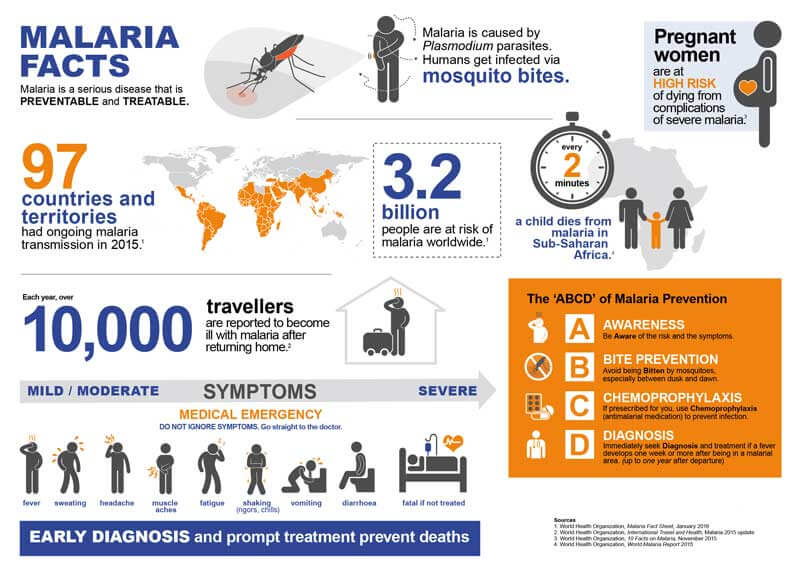